[This research summary was written in 2010]

A complete \(R/L_T\) scan for the Cyclone Base Case with adiabatic electron was published in [CW03b]. We reproduce below Fig. 11 from that publication: 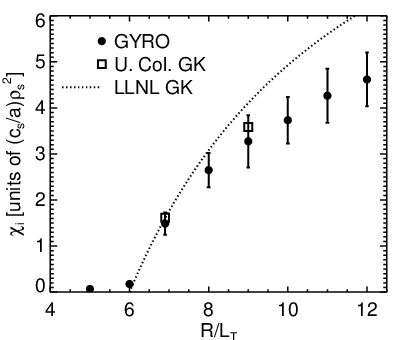 Figure 1: \(\chi_i\) versus \(R/L_T\) scan for the Cyclone Base Case, compared with results from the LLNL and Univ. of Colorado gyrokinetic PIC codes.

After the publication of this work, a community-wide benchmark exercise was carried out between codes with local capability (GYRO and GS2) and a global code (GTC). The difficulties encountered by the global code in attempting to reproduce the local limit in \(s-\alpha\) geometry was addressed in [CWD04], where it was demonstrated that the local limit can be achieved in a truly global simulation. We reproduce below Fig. 3 of that paper: 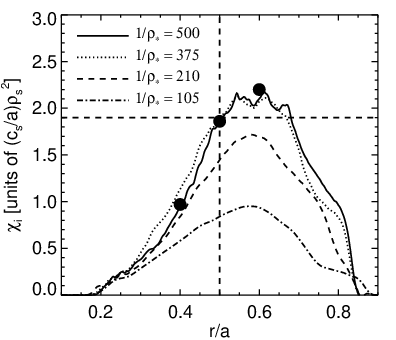 Prior to 2004, basically all simulation work was done with pure plasmas. As part of a Ph.D. thesis (Estrada-Mila), a paper on the topic of transport in impure plasmas [EMCW05] was published. This work contained crucial benchmarks with the GS2 code. Figure 1 from that paper is reproduced below: 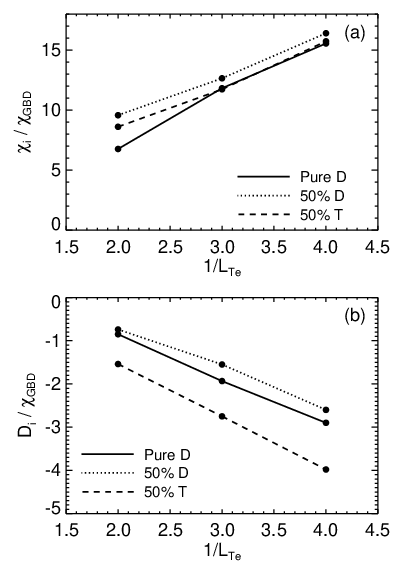 Figure 3: Adiabatic electron comparison of growth rates for the GYRO (solid line) and GS2 (black dot) codes. Also shown are published results by Dong [DH95] (dotted line) which neglect trapping. Plot (a) shows the growth rate as functions of \(k_\theta \rho_s\). Plot (b) shows the effect of carbon concentration, \(f_C = z_C n_C/n_e\), for \(k_\theta \rho_s = 1/\sqrt{2}\) and \(s=1\). All other parameters are the same in both plots. Agreement between GYRO and GS2 is extremely good.

Motivated by incorrect published results from a global code, a large community-wide benchmark exercise was carried out including the most advanced European gyrokinetic code, GENE. The results were published in a paper [NCC+06] that clarified difficulties associated with simulations of ETG turbulence, and a new low-shear operating point was designed so that benchmark case was physically well-behaved. Remarkable intercode agreement was obtained 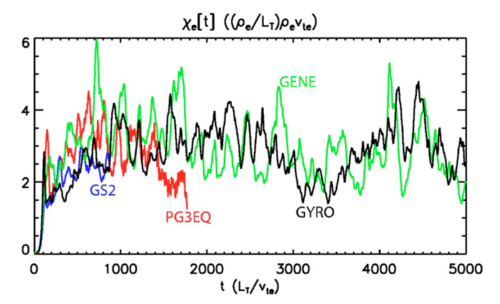 Later, the exercise was successfully achieved by the GEM code. The GTC group refused to participate.

Following up on initial work by Estrada-Mila [EMCW06a], Angioni [APP+09] carried out detailed GS2-GYRO comparsions of alpha particle quasilinear transport coefficients. This comparison tests, among other things, the multi-scale accuracy of the gyro-averaging operators for electrons and ions. Below we reproduce Fig. 5 of that paper: 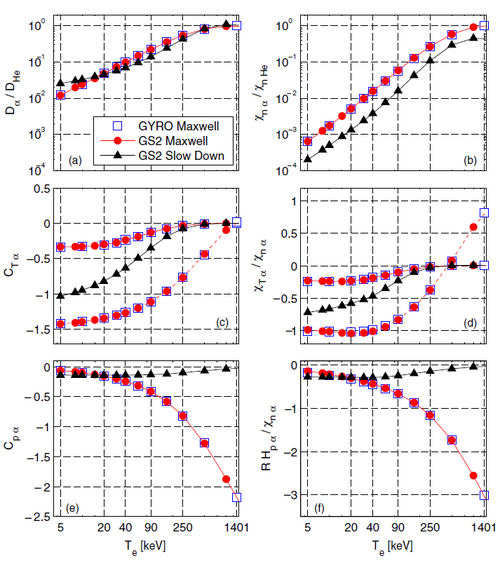 Recently, compressional electromagnetic capability, \(\delta B_\lVert\) was added to GYRO and linear benchmarks were carried out against GS2 – the only other nonlinear code with the same capability: 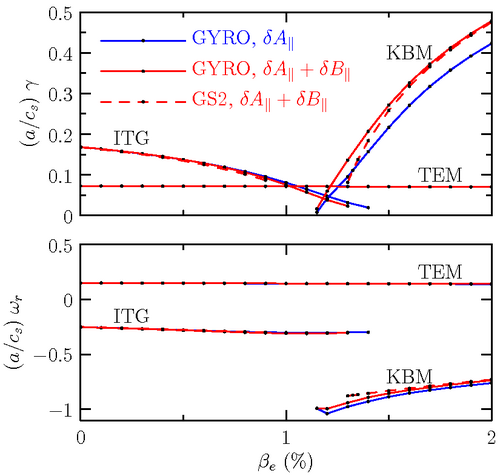 Abstract – The implementation of synthetic diagnostics that model physical beam emission spectroscopy and correlation electron cyclotron emission diagnostics is presented. Initial results from their applications to local gyrokinetic simulations of two locations in a DIII-D L-mode discharge performed with the GYRO code are also discussed. At both locations, the attenuation of the GYRO-predicted fluctuations due to the spatial averaging imposed by the diagnostics’ spot sizes is significant, and its incorporation via the use of synthetic diagnostics is shown to be essential for quantitative comparisons such as these.

Successes – At normalized toroidal flux \(\rho=0.5\), very good agreement was found between experiment and simulation in both the energy flows and fluctuation levels measured by both diagnostics. At both locations good agreement was found in the shapes of the radial and vertical density correlation functions and in the shapes of the frequency power spectra.

Abstract – Data is taken from ohmic plasmas in the Alcator C-Mod tokamak using phase contrast imaging (PCI) diagnostic, with experiments carried out over the range of densities covering the ‘neo-Alcator’ to the ‘saturated ohmic’ regime. This was compared with GYRO simulations using a synthetic PCI diagnostic method.

Successes – The key role played by the ion temperature gradient (ITG) turbulence has been verified, including measurements of turbulent wave propagation in the ion diamagnetic direction. It is found that the intensity of density fluctuations increases with density, in agreement between simulation and experiments. The absolute fluctuation intensity agrees with the simulation within experimental error (±60%). In the saturated ohmic regime, the simulated ion and electron thermal diffusivities also agree with experiments after varying the ion temperature gradient within experimental uncertainty.

Abstract – Turbulence measurements in TORE SUPRA tokamak plasmas have been quantitatively compared to predictions by nonlinear gyrokinetic simulations. The GYRO results simultaneously match within experimental uncertainty (a) the magnitude of effective heat diffusivity, (b) rms values of density fluctuations, and (c) wave-number spectra in both the directions perpendicular to the magnetic field. Moreover, the GYRO nonlinear simulations help to revise as an instrumental effect the apparent experimental evidence of strong turbulence anisotropy at spatial scales of the order of ion-sound Larmor radius.

Anomalies – At \(\rho=0.4\), the local GYRO simulation finds conditions of marginal turbulence, underestimating the observed transport level by a factor of 3.

Anomalous Transport in the DIII-D Tokamak Matched by Supercomputer Simulation¶

Abstract – The measured transport levels and apparent Bohm-like scaling observed in the DIII-D tokamak was reproduced with in experimental error bars using a series a GYRO simulations and sensitivity studies.

Successes – For nominal experimental paramaters, the electron transport is closely matched while the ion transport is overestimated by about a factor of 2. Decreasing gradient within error bars brings both into rough agreement.

Anomalies – There is a robust relative underestimate of electron transport.